I am so happy with how my closet turned out! To be honest, I had pretty low expectations given that I had exactly 0 building or construction experience – minus one very janky console table I attempted a few months back. If you don’t believe this was my first build, you will after the ‘in progress’ pictures.  🙂

This whole thing started out with a trip to Ikea (isn’t that how every great story starts out?). I fell in love with their “PAX” closet system. We had a spare bedroom in our new home with a long blank wall that I thought would be perfect to use as a closet, since the actual closet in the room was pretty tiny – also because I watch way too many YouTube videos and got the idea in my head from other ‘beauty gurus’ doing it. After just guess-timating the total cost of everything I would want though, it came out to a cool $1000+. I just could not justify $1000 on an object to hold my clothes. Not to mention, for that price, the Pax system is just an open wardrobe, and if I’m going to spend that kind of money, I want it to look custom and built-in. If you’re wondering, I also googled custom built in closets, let’s just say the $1000 for the Ikea system was cheap.

After a great deal of debate with myself, and watching more ‘DIY built-in’ videos on YouTube, I decided to attempt to just make a built in closet on my own. Because that’s how my brain works – “Oh you’ve never done this thing before? Eh, I’m sure it will be fine.” Honestly, though, that’s really what tipped me over the edge on deciding to go for, what could really go wrong? Initially, I didn’t plan on cutting any of the wood myself, since pretty much all of the major hardware stores will do it for you. This ended up changing, but I’ll explain that later. At any rate, with the possibility of cutting my finger gone, I figured the worst that could happen would be that it sucks, and I scrap it, but at least I tried.

My entire plans were based around the Ikea PAX system, because they had a few components that I knew there was no way I could build, that I really wanted – like their pull out pants hanger. I also went this route because it seemed the easiest. At it’s core, the PAX system is just a box “frame” with a bunch of shelves, drawers, or whatever else you want to add. I thought how hard could a box and a few selves be to make and then the things I couldn’t make, I could buy and install, as long as I made the dimensions exactly the same.

For reference, here’s an example of an Ikea PAX configuration: 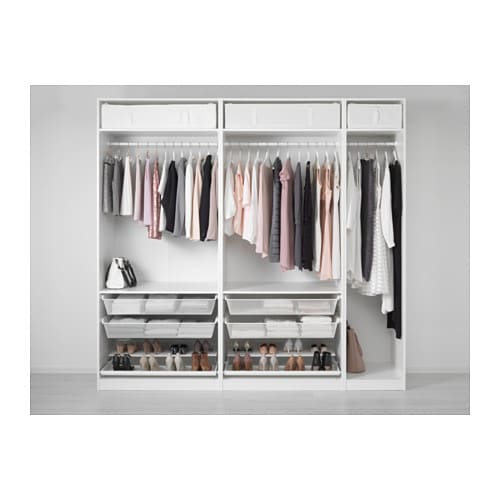 I started out with some rough plans that mostly stayed the same, but did morph as I got deeper into the project. The wall I was working with was 14′ 1″ wide by 8 foot tall. The dimensions of the Ikea frame that I was mimicking was 29 1/2″wide by 22 7/8″deep by 93 1/8″ high (there are different depths, but I didn’t want the hangers/clothes sticking out so I went with the deepest one). I also decided to make my frames not as tall, because I knew I wanted to have a base for it all to sit on and crown molding at the top to make it look built in, so I only made the 89″ high. I also rounded the depth up to 23″, because 1/8″ wouldn’t make a difference in the end and would make measuring a little easier. I got the idea for the base (and some motivation) from Saw Dust Girl‘s plan.

I liked the idea of a bigger, open space in the middle to set jewelry, perfume, etc. on, so I went with 4 frames which would total 118″ wide. With the room being 169″, that would leave me with 51″ for a dresser or cube storage in the middle.

My initial plans (you can see how they changed) very professionally made in Paint: 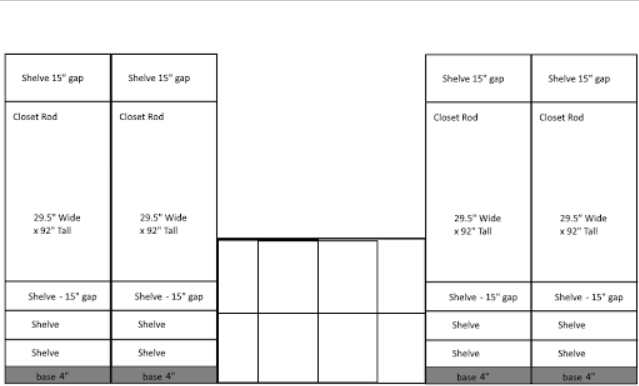 I started out only buying materials to build 1 frame. I figured that way if it went badly, I wasn’t out much and I could always go back and get more if it went well. I used 3/4″ MDF from Home Depot, don’t worry I had no idea what that was until I started this project, but again, shout out to SawDustGirl. For an 8′ by 4′ board, it was $22.84. I could fit the 2 sides of the frame on a single board. I would need an additional board for the shelves.

You can use MDF or Plywood for yours. The upside to Plywood is it is MUCH lighter – the MDF Sucked (with a capital S) to move around, but was a good workout. The downside is it’s also more expensive. To get the same thickness in a quality that would paint well would have been around $50 per board – over double the MDF.

Off to my first (of MANY) trips to Home Depot:

The first frame (once I decided the frame turned out okay, I went back to Home Depot and got closet rods and the braces):

You can see the hardboard (the dark back) in the third picture, just set it in place then nail it down with 3/4″ brad nails.

I won’t go into great detail about the dimensions between shelves, because that can literally be whatever you want it to be.

After the first one went well, I made 2 more. I saved the last frame for after I put the middle piece in. That way I would know EXACTLY how wide to make it, if it all didn’t line up exactly as originally planned. 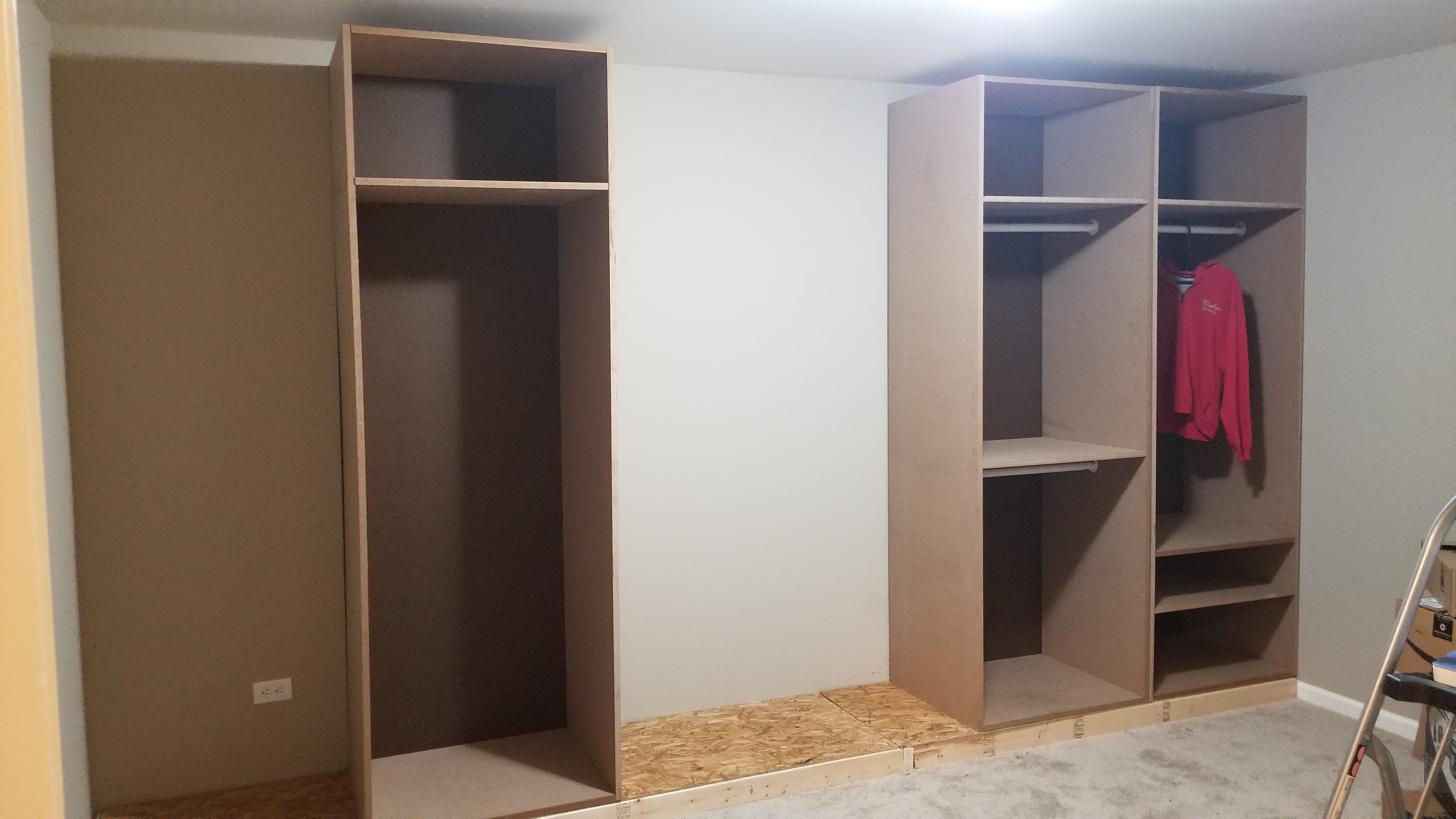 You can see in this picture I had also made the “base” for everything to sit on. Here’s that in process. The base is extremely simple. A bunch of cheap 2″ x 4″ and some cheap 1/2″ particle board nailed on top. I made a couple (easier to move) until it wen’t the length of the room, then screwed them together with 3 1/2″ screws.

Now it was time to add the Ikea components that drove this whole thing. They call these “Komplements” and I added a glass shelf, a pull out tray, a pull out pants hanger, and the glass front drawer. Building this entire thing around 4 items might seem insane – but it worked out! I’m not including these in the cost, because they are completely unncessary and you can just add more MDF shelves or another rod in their place – or whatever you want. 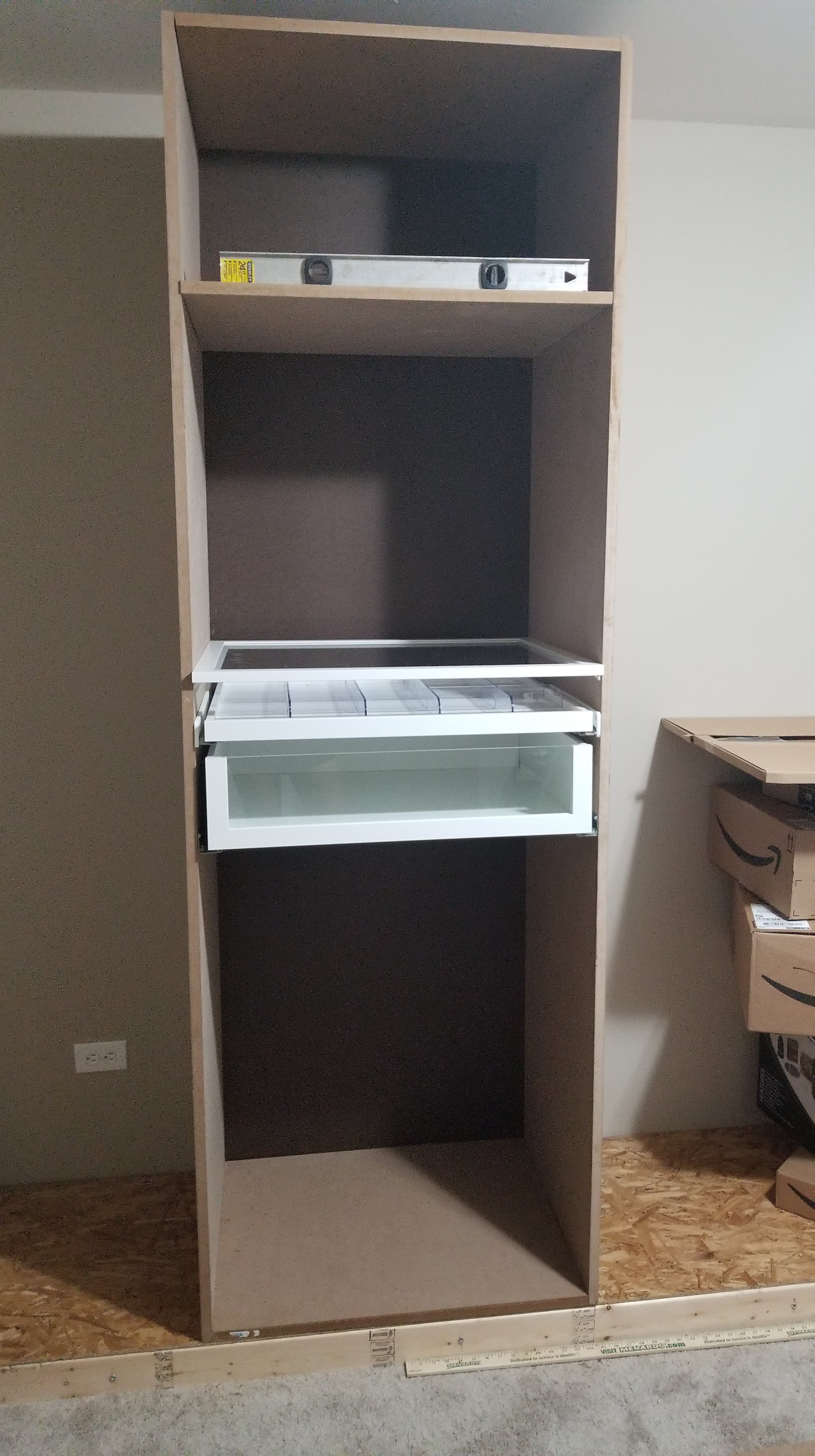 Next it was time to figure out what to do with that middle space. I was originally going to do cube storage, but I decided I really wanted drawers. I did not feel confident in my drawer making ability so I found a white dresser on Amazon (Prime FTW) that was roughly the length I needed. I went with this one at 51.25″ wide and 19″ deep. 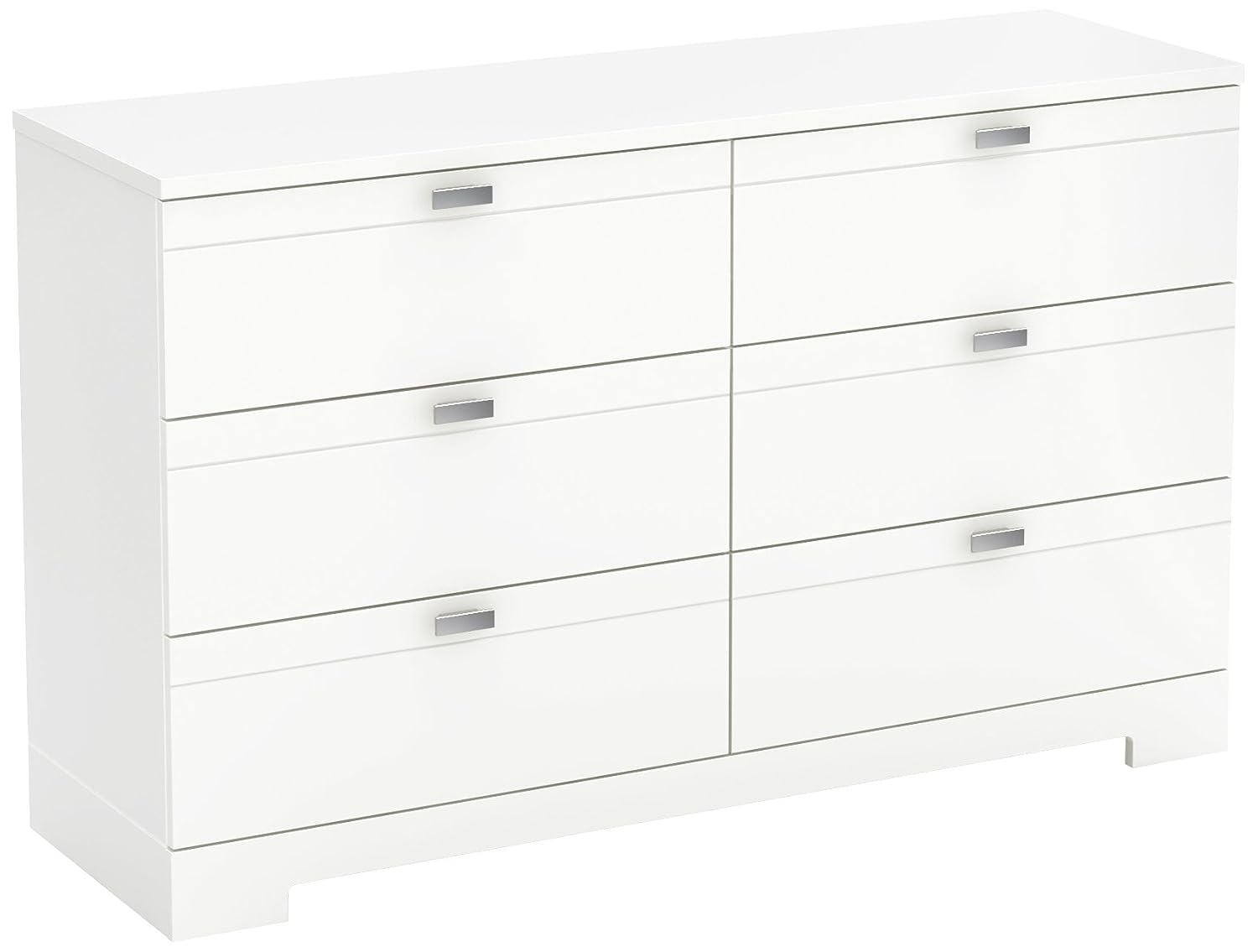 The reviews on it aren’t great, but I only really needed the drawers. Plus, when I bought it, it was only $150 and I also had some Amazon gift cards and promo credits on my account that made it extremely cheap.

Because it wasn’t the right depth, I took the top off and make my own out of MDF – and by made, I mean I cut a rectangle piece of MDF and screwed it down. You can also see in the original picture, the dresser has “feet,” which I cut off so that in the end it would look built in and would not have any gaps. 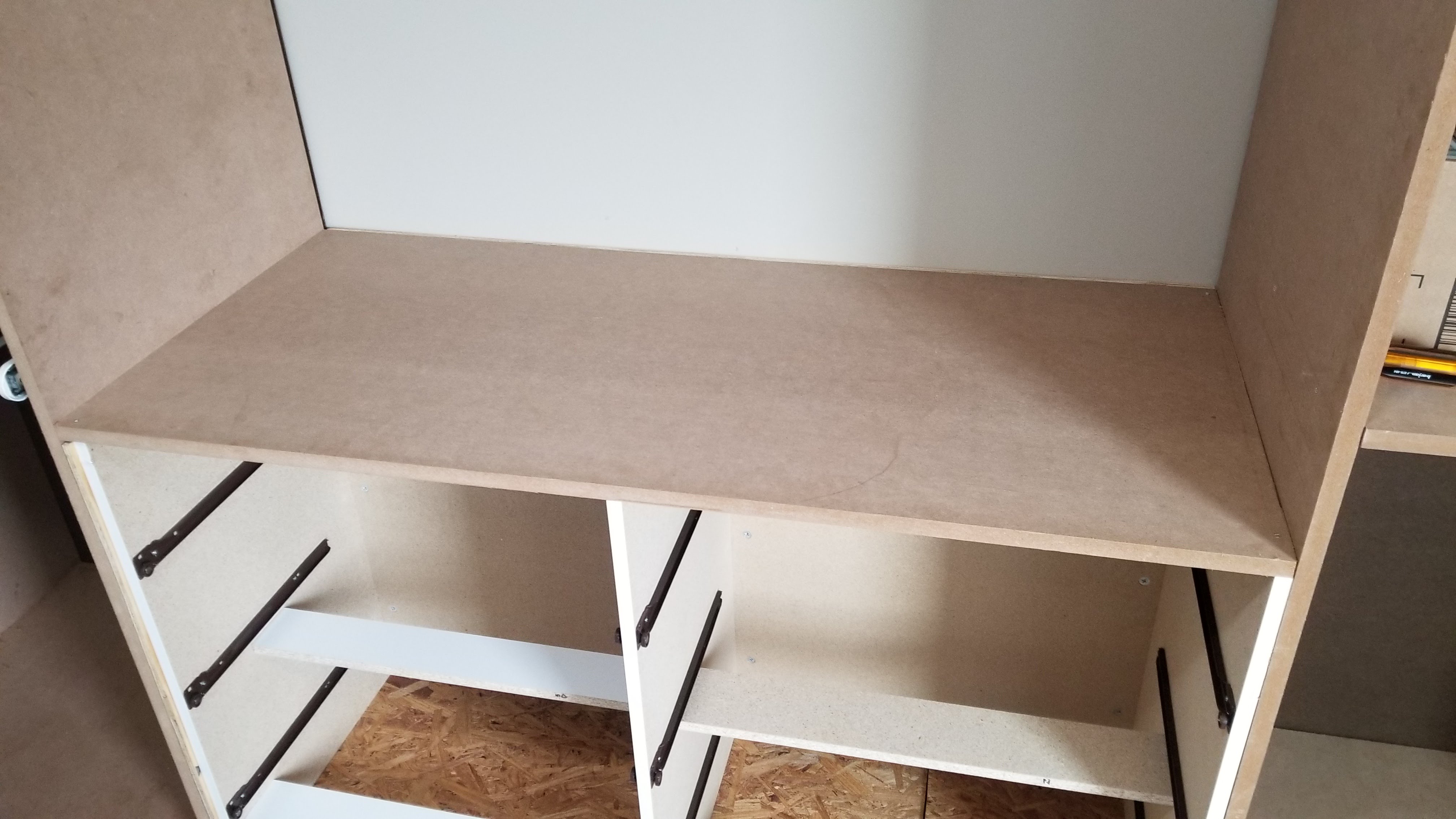 There was a little bit of a gap here, so I stuck a thin piece of particle board I had leftover from the base between.

Just showing how I cut off the “feet” from the base piece of the dresser. 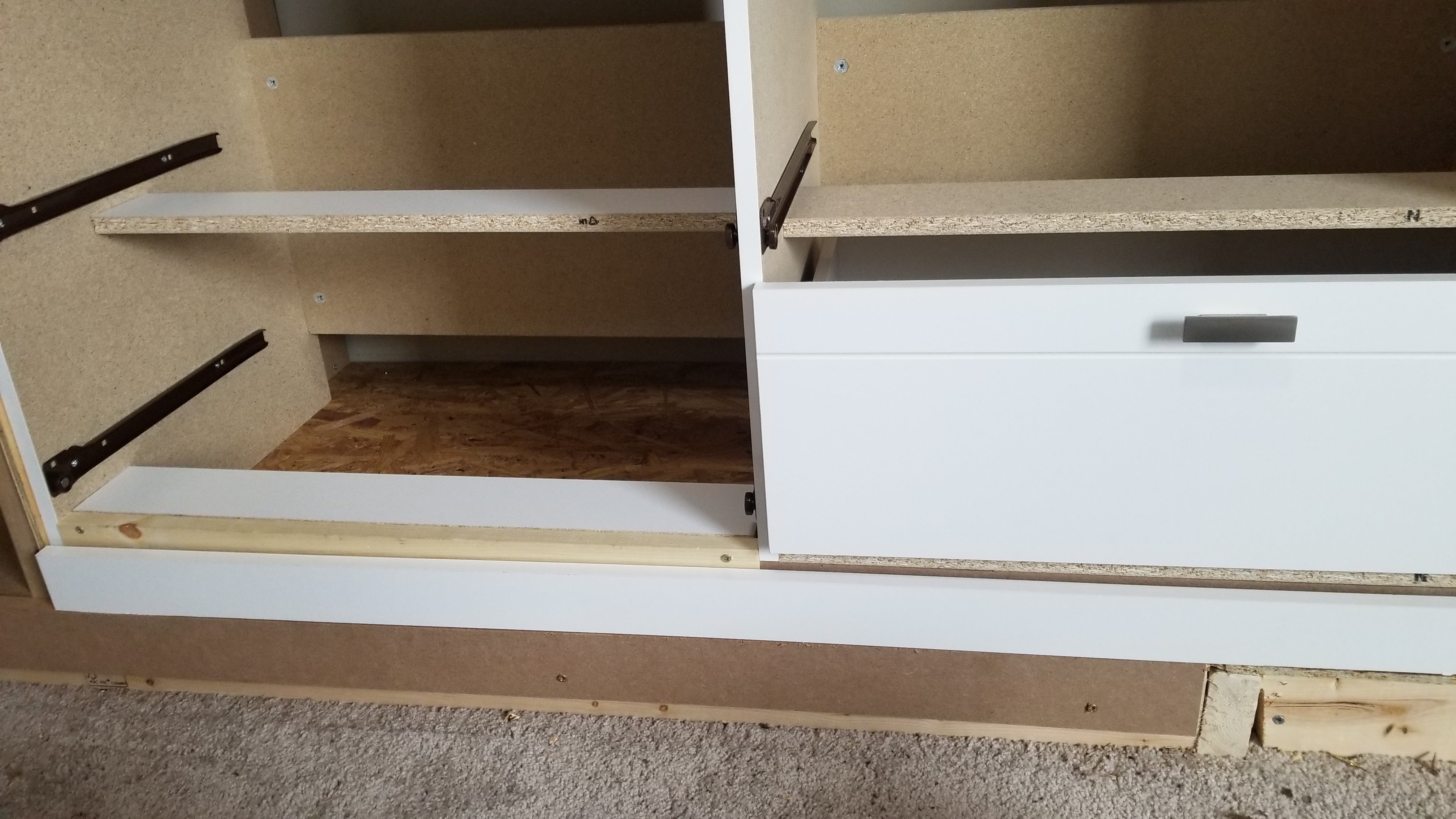 Update: In retrospect, if I bought a router, I probably could have made the drawers myself. I was pretty anxious to get it done by this point though so buying them did save a ton of time.

You can also see in my original plan, I was going to leave the area above the dresser totally empty. That looked good in my head, but not in real life. So I added the top piece and another shelf 15″ down to align with the others. 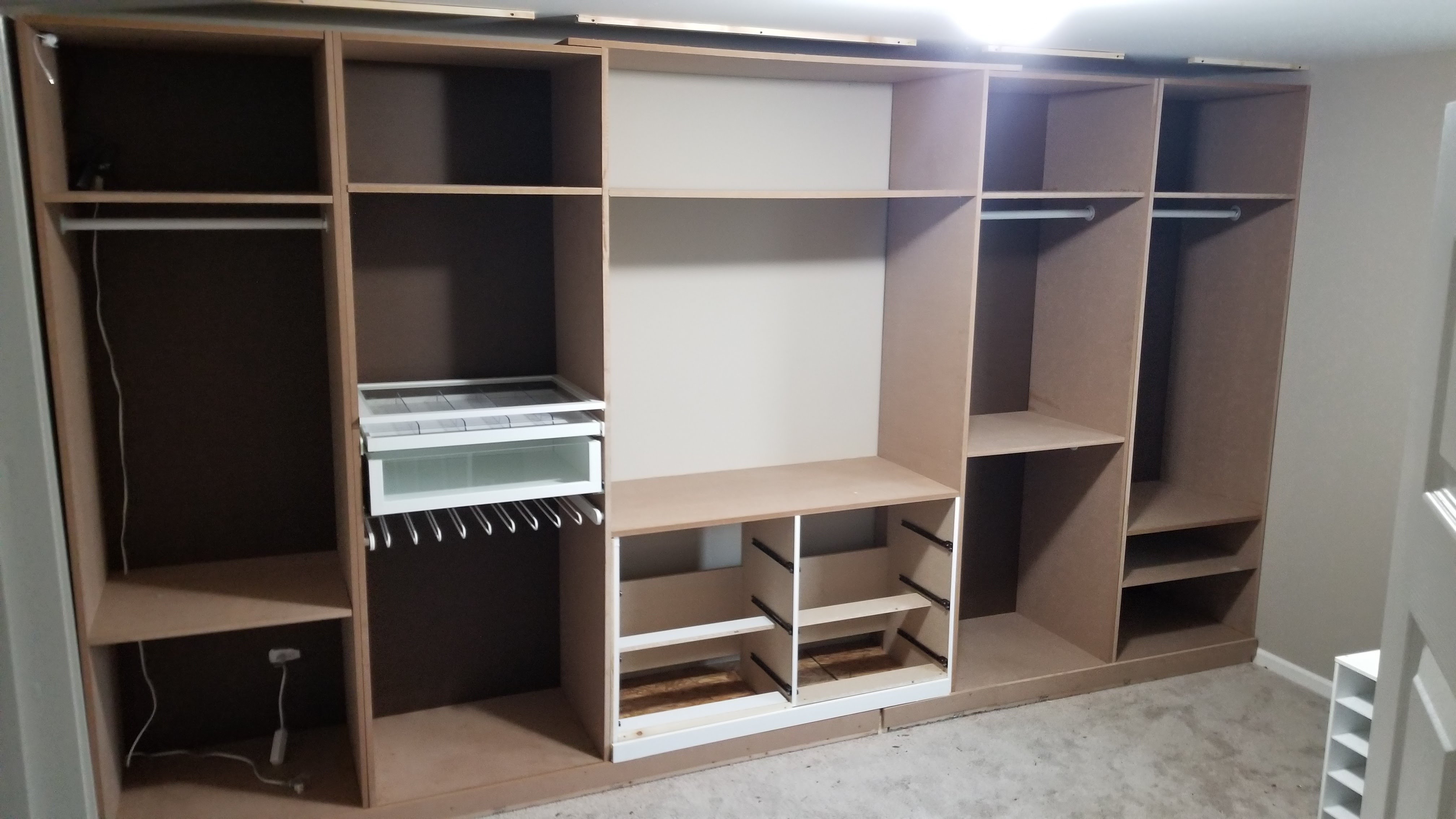 Oh, you’ll also notice in the picture above, the cord – and I made the last frame. I measured ahead of time where the outlet was and cut that spot out of the hardboard. “Cut” is a bit of a stretch, it looked more like a cat dug at it with it’s claws, but whatever, I could plug stuff in. Then all I did was drill a 1″ diameter hole through the shelves in the corner so I could get an extension cord up to the top for the LED lights, which I’ll explain further down. 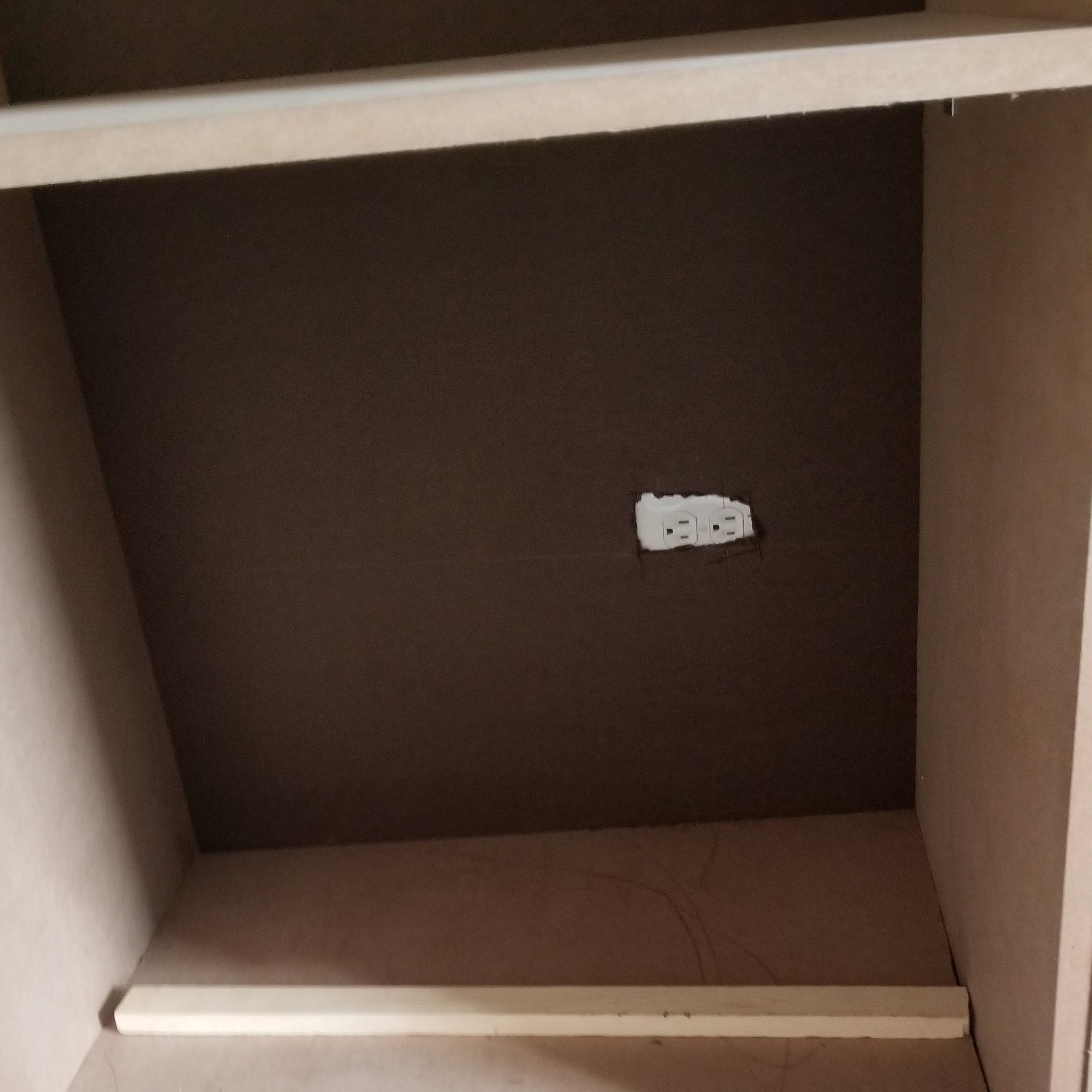 Okay! we’re in the home stretch – all the main building is done and it’s time to add the ‘trim’. Before I could add the trim though, I needed something to connect the top of the crown molding to, so I screwed a couple pieces of 1″ x 2″ pine to the ceiling, which I learned from this video. The video does a much better job, but if it works, it works. 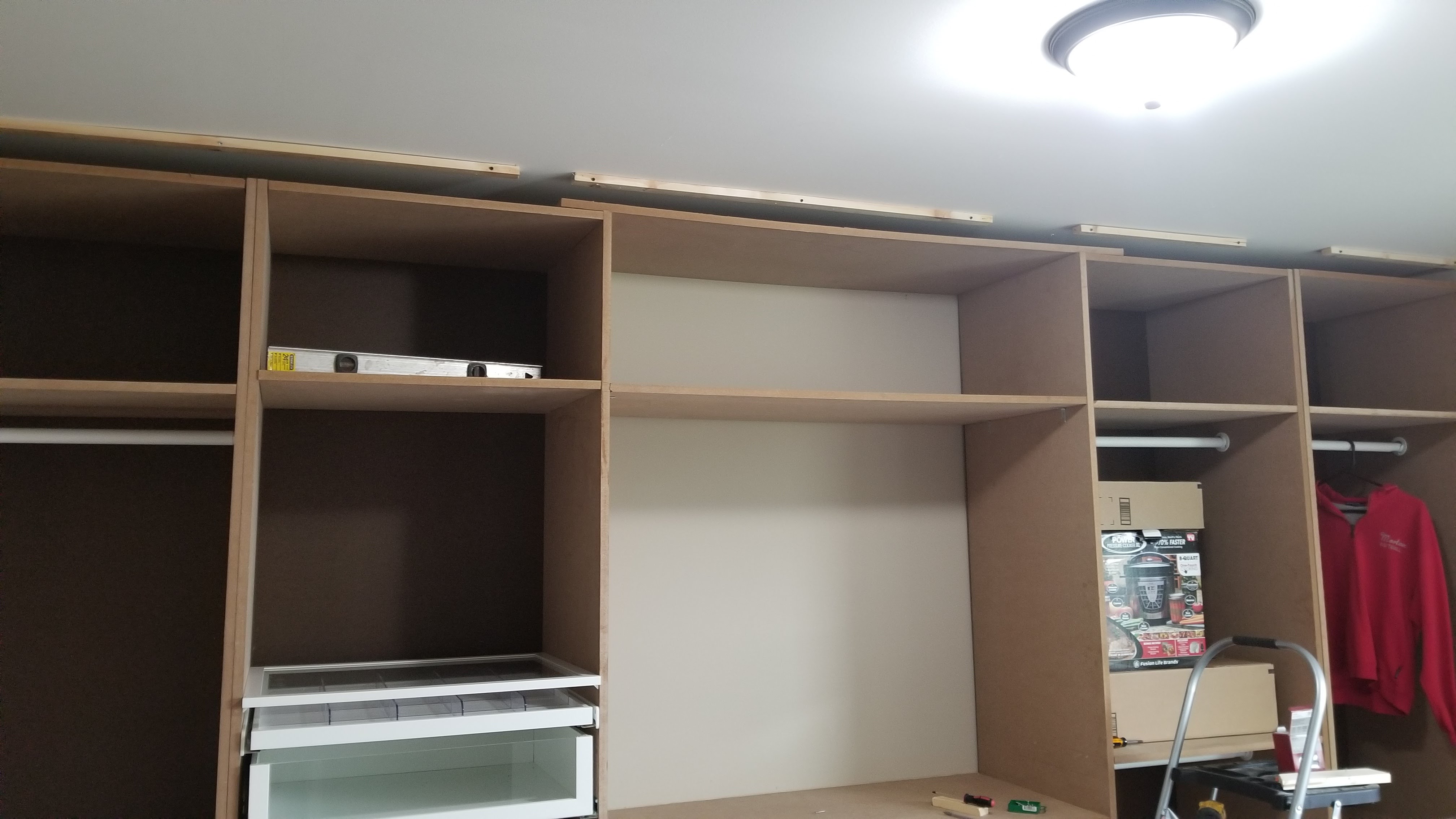 TA-DA! Trim is on! What a difference, right?! That is literally all that changed. Trim makes a HUGE difference, I was feeling iffy about the whole thing until I got the trim on!

Oh, you’ll also see the little cube organizer in the bottom left corner. I bought that (HERE) for $30. I wanted something for my smaller shoes – flip flops, etc. and $30 seemed pretty cheap and a lot easier than making it – again, I was pretty exhausted and ready to be done by this point.

After this, all that was left was to caulk and paint – and add the lights at the end if you want to be extra. Caulk is your best friend if you end up attempting this. Anything that was a little off or doesn’t look ‘built in’, will after caulk. I watched this video on how to caulk that had some great tips if you’re like me and have never caulked anything ever.

After caulk and the first coat of paint (I ended up doing 3):

For the lights, I bought these LED strip lights on Amazon: 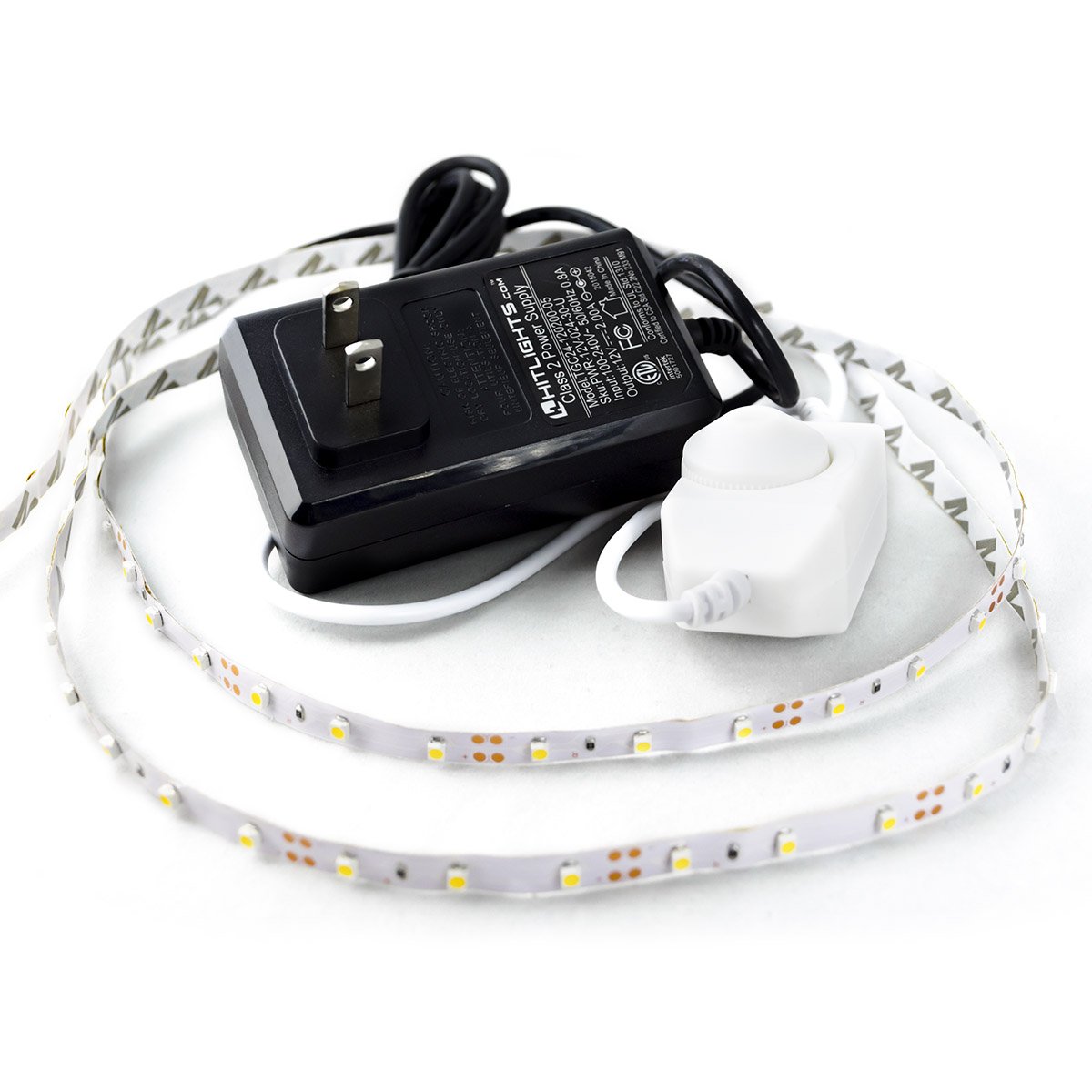 They come with sticky stuff on the back, so I literally just strung them through (I had a small gap between the trim of the towers that fit it, but you can also drill a small hole) and stuck them up! That outlet that I plugged them into was connected to one of my light switches, so I can turn them on and off that way, but you can also buy very similar lights to these that have a remote.

That’s it! The whole thing took me probably 2 months, but I only worked on it some weekends and a few days after work. If there’s anything I learned from this that I would want to tell others’ who have never built anything attempting this it would be:

If you’re wondering about the rest of the room. I plan to also DIY a closet island, which I’ll post when I’m done. In the meantime, you can also check out my DIY light up vanity mirror here! 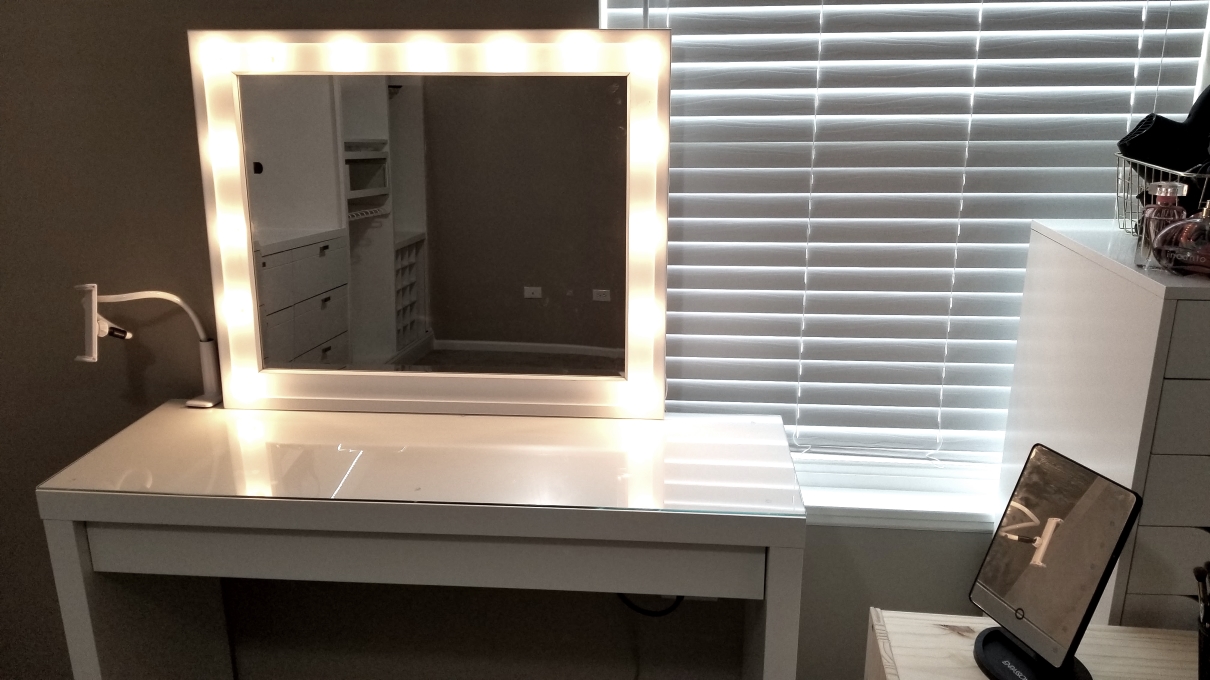 For anyone wondering, that iPad stand (super necessary for watching YouTube videos while getting ready lol) is from Amazon for $8.99, here.


Widget not in any sidebars
Continue Shopping →
Item added to cart.
0 items - $0.00
Checkout